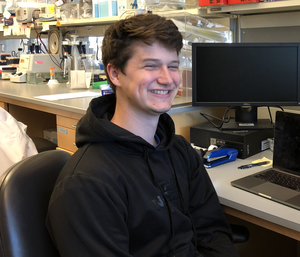 Gabe is a graduate student in the Harvard Virology Program. He received his B.S. (’18) in Chemistry from Duke University. During his undergraduate degree he studied novel genes in the commensal fungi Malassezia furfur. His research in the Barouch lab focuses on viral vectors both adeno-associated viruses (AAV) and adenoviruses. His AAV work is focused on investigating novel AAVs found in SIV infected Rhesus Macaques. His adenovirus project is aimed at generating adenoviral vectors as a cancer therapeutic. In addition to his research, Gabe is involved as a mentor in HPREP and SHURP. He is also an avid basketball and football fan and plays basketball and tennis in his spare time.