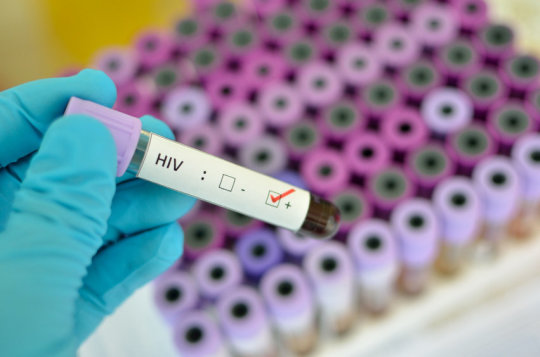 A study led by researchers at Beth Israel Deaconess Medical Center (BIDMC), in collaboration with scientists at Walter Reed Army Institute of Research (WRAIR), Janssen Vaccines & Prevention B.V., one of the Janssen Pharmaceutical Companies of Johnson & Johnson and Gilead Sciences, Inc., has demonstrated that combining an experimental vaccine with an innate immune stimulant may help lead to viral remission in people living with HIV. In animal trials, the combination decreased levels of viral DNA in peripheral blood and lymph nodes, and improved viral suppression and delayed viral rebound following discontinuation of anti-retroviral therapy (ART). The research team’s findings appeared online today in the journal Nature.

“The objective of our study was to identify a functional cure for HIV — not to eradicate the virus, but to control it without the need for ART,” said lead author Dan Barouch, MD, PhD, Director of the Center for Virology and Vaccine Research at BIDMC. “Current antiretroviral drugs, although they’re lifesaving, do not cure HIV. They merely hold it in check. We are trying to develop strategies to achieve ART-free, long-term viral suppression.”

Typically, vaccines “teach” the body to rid itself of viral invaders by provoking an immune response. However, HIV attacks cells of the immune system. The virus kills the majority of infected immune cells but goes dormant in others. This reservoir of dormant, infected cells, where researchers believe HIV remains hidden during antiretroviral therapy, is the primary reason HIV cannot currently be cured. Barouch and colleagues are working on strategies to draw the virus out of hiding with the goal of eradicating it from the body.

“We reasoned that if we can activate the immune cells that might harbor the virus, then the vaccine-induced immune responses might perform better seeking them out and destroying them,” said Barouch, who is also a Professor of Medicine at Harvard Medical School. “Indeed, we saw the best results when we combined the vaccine together with the innate immune stimulant.”

In the two-year long study, researchers monitored the viral loads of 36 rhesus monkeys infected with simian immunodeficiency virus (SIV), a virus similar to HIV that infects non-human primates. After taking suppressive ART drugs for six months, the monkeys were given either the experimental vaccines — an adenovirus serotype 26 vector vaccine and an MVA vector vaccine (Ad26/MVA) — alone, the immune stimulant (an experimental drug that works on a protein of the immune system called TLR-7) alone, or the Ad26/MVA and stimulant combination. A control group received no active treatment.

“We found the combination of Ad26/MVA vaccination and TLR7 stimulation proved more effective than either component alone,” said Col. Nelson Michael, director of MHRP, who helped design the preclinical study. “This was especially striking in viral load set-point, which impacts the future course of the disease.”

The experimental vaccine induced a robust immune response, both in magnitude (the number of immune cells generated) and breadth (the number of places on the virus the vaccine can targets).

To evaluate the efficacy of the vaccine and the immune stimulant, the researchers discontinued ART in all animals and continued to monitor their viral loads. Animals that received only the vaccine demonstrated some reduction of viral load, but the animals that were given the vaccine/immune stimulant combination showed a reduction in plasma viral RNA levels as well as a 2.5-fold delay of viral rebound compared to controls. All nine animals showed decreased viral loads, and the virus was undetectable in a third of the animals.

“If all the animals’ viral loads had been undetectable, that would have been a home run,” said Barouch. “But the fact that all animals showed a reduction in viral load and three out of nine were undetectable, that’s a solid base hit. It’s definitely something that we can work from.”